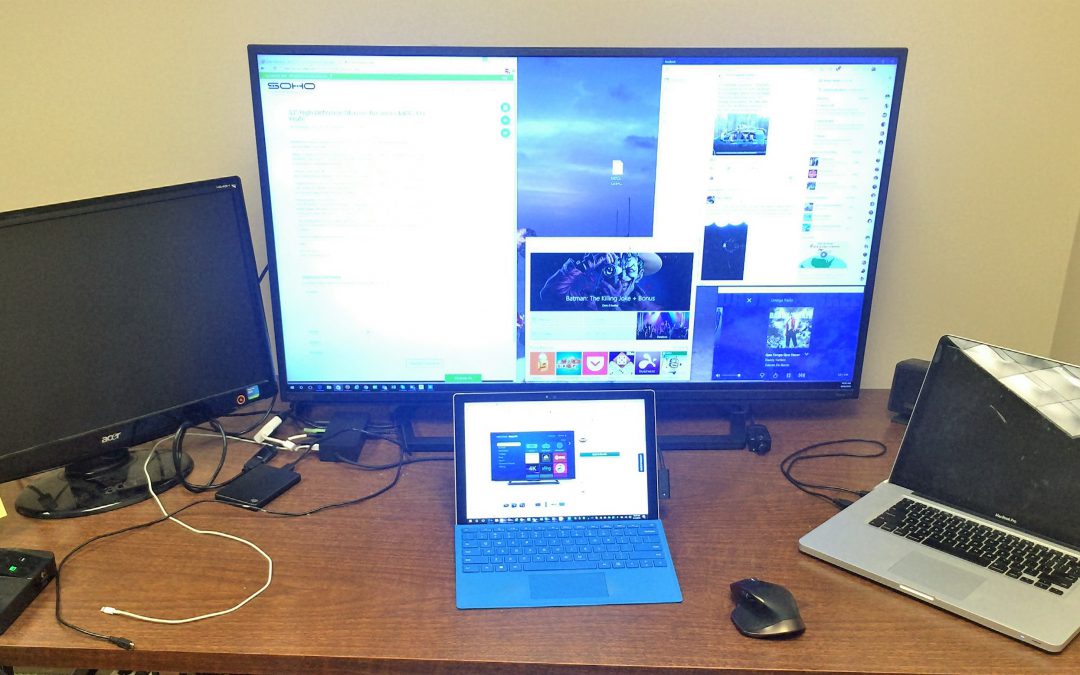 As with most people who work on a computer all day, we’re typically wanting bigger and nicer monitors so we can have more ‘real estate’ on the screen.

I began to look at 4K monitors, however the prices were still too steep, and I thought – why not a 4K television?  The resolution is 3840 c 2160 – and I could easily put a 43″ monitor on my desk…  However looking into it, it appeared that people had varying experiences.

Early on, most of the 4k monitors couldn’t do the 60 hz refresh rate, so the mouse was delayed, etc.  That didn’t sound like an upgrade to me…  However I continued to look into it in my ‘spare’ time…

I began to find out that there were more televisions that were capable of doing 60 hz, but then there were color issues, and NONE of them had DisplayPort inputs unless you looked at VERY expensive televisions… and at that point I may as well have looked at 4k Monitors – not TV’s.

The next part was finding a cable to go from mini-display port on my Surface Pro 4 docking station to HDMI 2.0.  I found that with the ‘Club 3d Mini display Port’ adapter and then a $10 4k rated HDMI cable from Staples.

The end result is a nice, crisp, quick 43″ monitor on my desk.

** You MUST have a video card that can push the resolution!  Surface Pro’s and Surface Books are able to (refer to this Graphic).  You will read people arguing that it won’t work, etc.  You wont’ be able to play games on this at a high frame rate, etc. however for web browsing, coding, email, graphics work, etc. its just fine!

(the wash-out is from the camera and lighting)